Why are men obsessed with sex and how to deal with it? 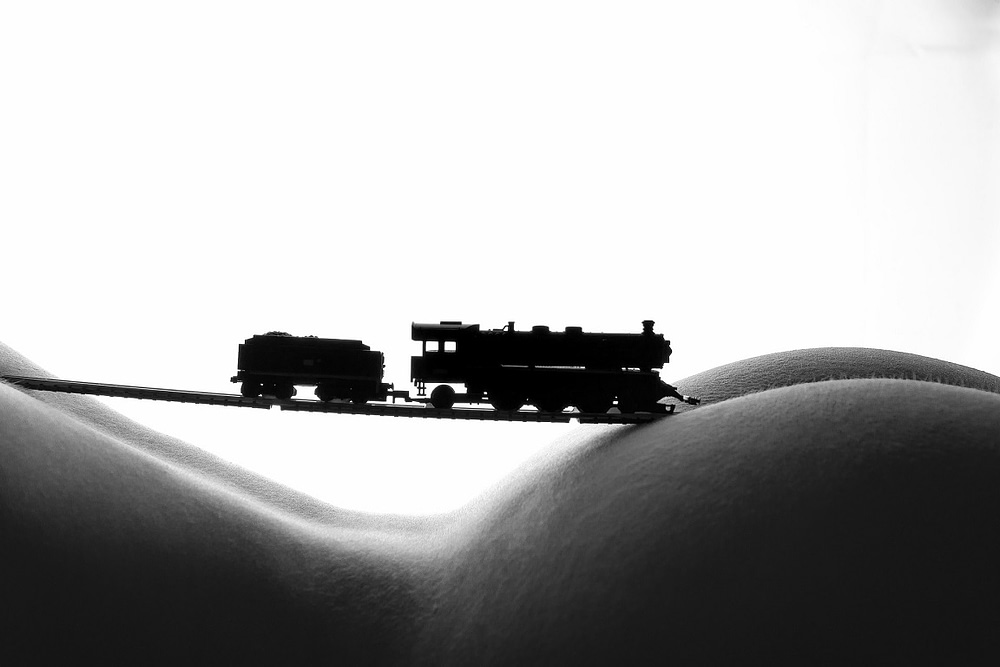 It's a classic stereotype: men are always hungry for sex (or supposed to be), and whenever they meet someone they might be attracted to, they will always think about having sex with them. Why? Is it only gender stereotypes? Well, not only.

1. Touch is a natural need for all humans – and a sign of love

First, men are human beings. (I know, it might come as a shocker to some of you ladies 😉 ).

Human beings need affection, and touch. There was a notorious experiment in the darkest days of the USSR, when they gave babies the best in terms of food, comfort, basic biological needs, but no human interaction - and all of those babies died in a few weeks. Relationship and human contact, physical contact, is a basic, vital human need, in the same way as food.

Note: while our need is for positive touch, it seems that negative touch is still better than no touch at all, hence some really disturbing effects in some pathological cases.

But, in our societies, stereotypes state that, whenever a man touches someone, it has some sexual meaning (or violent intent, or both).

Plus, men are supposed to be “tough”, and not “soft” – and cuddling, caressing, etc., are supposedly meant for women and young children.

Both factors combine: if you look male, any touch will be judged by those expectations.

The best way to see that stupid stereotype is when listening to people who despise masculinity, and talk of it. Quite often, they will talk of football or other collective sports, and make fun of the way the players rejoice after scoring. The implication is that those collective movements of joy have something "gay". It's not gay! Well, it is "gay", in the sense that it is joyful, not in the sense of sexual attraction.

So one will only touch others when feeling sexual, which makes the prophecy true and enforces the social stereotype.

But positive touch is a basic human need – plus it is an unconscious, animal need. So, men feel (they misbelieve) that they are hungry for sex – when they only need the hormonal balance provided by human touch. They are on the lookout for sexual opportunities, because sex is the only way their need for touch and relationship is met. Usually, a man is NOT conscious that this "sex urge" is in overdrive because of his need for recognition and contact, he sincerely believes that it is the sexual gratification that he seeks.

It is not easy to distinguish the articulation between our deepest needs and aspirations, and the desires that arise to our consciousness: if you want to understand it and avoid the trap of misleading desires, see this article.

Further, the fact that a touch from a male is usually perceived as either sexual or brutal (or both), makes it so that women will perceive any touch from a male as such – therefore, probably not welcome. Which is a further deterrent: if I want to be respectful, I will refrain from my natural tendency to touch people.

Plus, many women have experienced the trauma of unwanted, intrusive touch. And they will be all the more weary of contact. Which in turn will reinforce the touch deprivation for men. Further, the recent realisation and awareness around sexual aggression (#metoo), makes both men and women even more weary about unwanted man-to-woman touch, which makes innocent casual positive touch all the more scarce.

Therefore, the vast majority of men who will actually dare touch a woman will be those who have a genuine sexual motivation... which will reinforce the stereotype and social expectations... and therefore the gap between genders.

4. Gender gaps and the price men pay to male domination

The price of male domination is exorbitant, for the men themselves.

Women touch each other all the time – and I mean gentle, positive touch, gestures of reinforcement, positive feedback, support, including even non-sexual touch to sexually charged areas (buttocks....). Men do very little of that. Worse, the injunctions of "masculinity" make it so that the rare touch between them has to be brief and somewhat "rough", lest it be interpreted as sexually gay. In the rare case of a hug, it will seldom be relaxed, and hand gestures will not be caresses or lingering hands but pats. So, the rare touch is not gentle and deep enough to feed our need for oxytocin.

Even worse, since any touch from men may be interpreted as sexual, they are in constant vigilance to NOT touch positively, and even when it happens, they cannot fully relax - they need to be on the watch for others' interpretations of their intent. E.g. when my god-daughter takes me in her arms to cuddle with me, I cannot help but be very vigilant so that nobody interprets it as sexual. This prevents me from relaxing completely in her embrace. It will be the same with any friend who is not single (jealousy), female (misinterpretation of my intent), or male (being perceived as gay)...

All of that is cultural expectations ! People who have been on both sides of social gender (e.g. trans people who have reached the point of "passing", or social experiments such as Norah Vincent's "Self made Man") report how this is so different depending on one's perceived gender.

Of course, most men have some kind of positive physical touch in their daily lives. But it is so far from enough! I have read that we need a daily 20 minutes of hugging for hormone balance, and they mean true hugging, with abandonment - usually the first couple of minutes don't count because we are too tense... not counting the social pressure on men.

The only way men can get physical with other people outside of sex, will be in some "rough" experiences, such as martial arts, rugby – or just, plain fighting each other. Have you noticed how rugbymen and martial artists are more composed and relaxed than the average guy?

Unfortunately, if a man is more aggressive, he will get more opportunities for touch (even though this demeanour will get in the way of some other needs). Which creates a very toxic association in our minds between aggression and sexuality.

5. A difference between sexuality and positive touch.

Don't get me wrong: positive touch is a need, very different from the actual pleasure you have with sexuality. Gentle gestures such as those you find in a female environment are not sensual, they don't provoke the same pleasure as sensual contact.

Sex is the source of an intimate connection that is a need, and of a pleasurable physical gratification that is a natural and universal desire. All human beings experience both desires (even if the second is sometimes repressed).

On the other hand, most women need to feel trust before getting sexual. And trust is built through positive (pleasant and welcome) touch. (Actually, to access sexual pleasure, we all need some sort of trust that the interaction will be enjoyable, but most men have this confidence a priori, whereas women run the risk of physical pain)

6. Consequences of touch deprivation and reliance on sex:

Since cultural norms are so deeply ingrained that most consider them "natural", most men don't even have the opportunity to see where this frustration comes from, or to distinguish it from other desires. The need for connexion and touch, the aspiration for intimacy, and the wish for pleasure are all meshed up together. This confusion leads to the idea of “sexual needs”, or even the messed ups ideas of “sexual rights” that you find with some extreme misogynistic movements.

All of those can also lead to all sorts of issues, including addiction, depression, or aggression – some men will simply seek negative touch (violence), as it is so much more readily available than positive touch.

This also leads to much higher stakes associated with sex, with a social interaction resulting in sexual intercourse. Even though most of us don't realize it, sexual activity plays five roles to a man - and sex is almost the only source of the first three:

That is a lot of pressure for just one encounter outcome!

This in turn leads them to be more frantic in their quest for a partner - often, to the detriment of the quality of connexion, hence the “friendzone” / “fuckzone” misunderstanding.

However, many men find cuddling and non-sexual tender interactions frustrating, for several reasons:

7. What can we do about it, individually?

The first step in solving a problem, is to first identify it.

Now, unfortunately we cannot change society and norms that easily, but the more we are aware of them, the more we can wriggle inside the bonds they tied around us.

On a day-to-day basis, we can improve our ability to touch and accept touch without sexual intent. This includes the couple, but also our friends and acquaintances - being careful to aim for a neutral zone (arms, shoulders), and making sure that everybody is comfortable with it. I mean touch without intent, and especially not sexual, nor aggressive. Individually, being very aware of any touch we encounter on our daily life and appreciating it will help with the deprivation effect.

8. In our couples, recognising the other's experience and acting accordingly.

Women live in a world where they may encounter unwanted, aggressive touch, at any time – or at least they face the threat of such intrusion on a daily basis. They also face the threat that others’ sexual intent can be aggressive, intrusive, and lead to very painful experiences.

Men live in a world where their very bodily existence is ignored and rejected. Their fundamental need to be touched and accepted as a human is completely neglected: they are seen as potential threats, and never touched with welcoming and care.

Inside a heterosexual couple, it means that the man should be conscious of the woman's need for security and gentle approach, for not feeling assaulted, rushed or intruded upon. That means avoiding touch without previous eye contact, and always beginning touch with neutral zones before reaching the more intimate or sexually charged parts – and always making sure that the next step is welcome. He should make sure his active touch is gentle and measured according to her preferences.

Reciprocally, the woman must be conscious that the man is contact-deprived and in need of being accepted and welcome in his physical presence. She should recognise his need for contact, for recognisance. She should also take into account that his mind is wired to put more value on sexual touch than other contacts. A woman sex therapist gave me this tip, of acknowledging the penis, by touching it gently very early in the interaction (whereas a man has to do the opposite) – it makes him feel accepted as a complete being, and not a threat, feel that his desire and identity are acknowledged, and will help him relax in the rest of the interaction.

Fill out the form below to become a part of the community!

All Participants must be 18 years or older to join.

*We hate spam as much as you do. Your information will never be shared with any other party. You will receive our newsletter and nothing else.